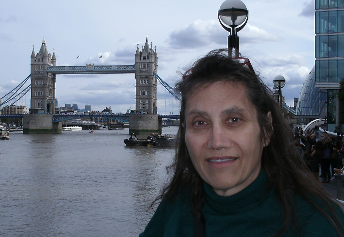 Looking for Jennifer T. Freeman, European author of many eclectic subjects?   You're already in the right place!

Orphaned at an early age, little Tasanee is shuttled around from relative to relative until she finds a permanent home. There, she learns why Thailand is called The Land Of Smiles.

The earliest memory I have is of Uncle Kiet leading me through the streets of Pattaya.

My parents died of cholera when I was 2. Uncle Kiet took me in, and raised me until I was 5. He wasn't rich, but he was well-to-do enough to have his own water buffalo.

At 5 I went to live with Aunt Kulap, who cared for me as best she could, but she never had much money.

Now Uncle Kiet is once again taking me through Pattaya, to a new home I suppose. I saw an elephant by the side of the road and told Uncle Kiet I wanted to be a mahout when I grew up. But he told me that wasn't for girls, and to hurry up....

We went to this large place by the outskirts of town. Uncle Kiet talks to the man for a minute, then he's ready to leave. He tells me I have to stay here now....

In the near future, New York City's Bronx is divided into the Upper and Lower halves. The Lowers are forbidden to cross the line, and it's Detective Walter Cray's job to make sure they don't. Yet a dangerous addictive drug is getting into the Upper somehow.

As I was driving south on the Upper Bruckner Expressway my cruiser radio beeped a short melody, with the codes for immediate action required, me, and linebreaker. I clicked the ACK button and on came the voice of 'Celia, the dispatcher.

"Gotcha a linebreaker on the Bruckner" she said. "'Think he's going to get off at White Plains. Go get 'im."

"You betcha. Automated Traffic Control has set the speed to 25, and enough drivers are actually obeying it so that the traffic jam is starting. Queueing picture."...

The Theory of
Organizing Everything

a quantum approach
to finally getting
organized at last

Combining her own experience, research, and the computer-efficient methods she learned from her previous career, the author has created a system that covers all the aspects of organizing your business, office, home, or life.

The Big Bang – Where did this mess come from?

Many scientists believe that 13.6 billion years ago, the entire universe was empty except for a single spot, much smaller than a pinpoint, that contained everything our big, modern universe contains now. This tiny point, very hot and unbelievably dense, exploded and expanded until it became all the stars, planets, comets, asteroids, and interstellar dust we see today....

As you look around your home or workplace, you too may see an expanding, complicated mess. When did it get this way? It didn't happen overnight. You and those around you surely contributed to the mess over a period of years and it's not going to go away anytime soon....